The Town of Mammoth Lakes is one of the premier ski destinations in the eastern Sierra Nevada mountains of California.  LECMgt is helping to upgrade the current emergency operations plans for the Town. Starting in January recording breaking snow began piling up. This made for a fantastic ski season for the local ski resorts but a snow emergency for the Town. Crews were working 24/7 to removing snow from the streets, residences, and buildings. 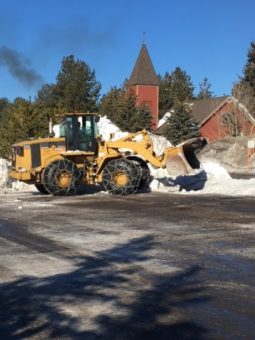 As the snow piled up several problems emerged. Buildings like the local hospital and police station were in danger of roof failures. Repeated snow storms kept covering the 500 fire hydrants in the town, homes were beginning suffer roof failures, and many storm drains were blocked with snow and ice. The Town leadership declared a local emergency. Dr. Roger Mason purchased snow chains for his car and the next morning drove from Los Angeles.  When asked why, Dr. Mason said, “We were hired to upgrade Mammoth Lake’s emergency plan and they are having an emergency. We need to be there to help in any way we can.”

Dr. Mason attended the daily incident action briefings, participated in emergency planning sessions, and contributed ideas for several of the ongoing problems. The Town leadership team was doing a great job but they needed more resources. One of the biggest problems was locating additional trucking companies that could assist hauling the snow that was being cleared. Most of the assets in the state had been directed to the Oroville Dam emergency and were unavailable.

The Guardsmen worked long hours in freezing conditions alongside firefighting crews from Cal Fire and teams from the California Conservation Corps. There were some great lessons from this incident. Emergency plans need to be up to date. Local authorities need to be familiar with available disaster resources and the process required to request them. It was exciting and rewarding for LECMgt to respond and directly assist a client dealing with a natural disaster.