We are thrilled to announce that our client, Temple City, CA has been ranked the 5th safest city in California by Safewise, in its report: 50 Safest Cities in California. This is truly remarkable for a small city in the heart of Los Angeles County, surrounded by dense urban development. Safewise combined its own research with the most recent FBI crime data to produce its ranking of cities. LECMgt has enjoyed our partnership with Temple City in its efforts towards a safe and healthy community, and we are thrilled to offer our congratulations.

At the same time, their success story makes a great case study. How does a city of this size, in an era of cutbacks and scandals involving local city governments, achieve such success?

1) Commitment from leadership and focus on preparation: When LECMgt was brought in 2010 to write the city’s emergency operations plan and complete is Multi-Hazard Mitigation Plan, it was clear that we were not entering what is a typical scenario in the emergency management business: police chief begs city leaders for help with emergency preparation and management; city leaders begrudgingly allow for a consultant, but offer no support; changes are never implemented to their full potential. In our relationship with Temple City the City Manager and other local leaders were unified in their desire for top of the line preparation. They attended trainings and stake holder meetings. They were instrumental in setting the tone for their employees and the community at large.

ernment and citizens work in tandem to keep Temple City’s streets safe” LECMgt has experienced the city’s commitment to maximizing stakeholder participation and community involvement first hand. We have a group of leaders from the faith community that are involved with Temple City. LECMgt provides them training related to emergency response and preparedness. Past training has included a briefing on the faith community response to Hurricane Sandy and operating comfort and relief centers after a major disaster. This year the group was invited to observe the citywide emergency operations table top exercise. The city featured us in the “Connect” Spring 2013 issue, and most of the issue was dedicated to educating the community on community wide emergency preparedness roles. 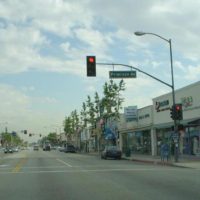 3) Willingness to learn and enthusiasm for excellence and growth: We have helped the city complete a continuity of government project that takes into account a loss of power. We have conducted trainings to ensure redundancy, and provided a rollout bag for each of the Incident Command System section chiefs, public information officer, and City manager. The rollout bags contain a flash drive with all necessary information, a sourcebook of the most critical items and checklists for each ICS position. Most exciting are the plans for the new Emergency Operations Center. The EOC was built out in 2013 and will be operational by the end of 2014. City leaders have expressed their vision for the EOC to establish an industry standard and plan to make it available for neighboring cities to tour.

The 2011 windstorm: preparedness pays off for Temple City

The best example of the benefits of being a well prepared city is Temple City’s recovery from the 2011 windstorm. On November 30, 2011 a windstorm hit Los Angeles County. By 11PM the city was experiencing high winds and gusts approaching 90 miles per hour. Power for hundreds of thousands of Los Angeles City Department of Water and Power and Southern California Edison customers began failing due to downed power lines and fallen trees. 14 utility poles snapped off at the base and fell cutting power to 90 per cent of the city and blocking numerous streets. Power remained off in some parts of the city for 5 days, and damage to the city made previously designated Red Cross shelter unusable.

One month prior to this disaster the City had the first Temple City Emergency Working Group meeting. This group is made up of the Sheriffs, County Fire, the school district, The Red Cross, the City Public Safety Officer, and the City emergency management consultant. Based on their preparation and time spent learning each other’s needs, roles, and assets, all members of the ICS team and community leaders were ready for their roles once an emergency was declared and the EOC was opened. Dr. Mason was available on call, and arrived within hours of the event to help open the EOC and begin execution of the EOP. The unified response was effective.

Damage was quickly assessed, Immediate Action Plans formed and executed quickly. Everything from debris removal, to traffic control, to restoring power to the local convalescent home while general power was still offline, to re-locating the Red Cross shelter was executed quickly and efficiently. City officials suspended normal operations, but kept city hall open for over 48 hours so that residents who did not have access to press briefings or other aid could come to have their needs met and questions answered. 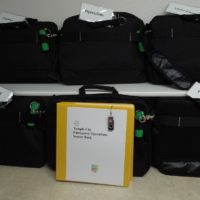 Temple City rollout bags help ensure continuity of government, even when the city is offline.

The disaster also provided Temple City the opportunity to demonstrate its excellent community relations and ability to harness volunteer power. CERT volunteers were stationed at city hall to “triage” community members’ needs and facilitate services as quickly as possible. A 24 hour phone line was established. Out of town family members and friends of elderly and health compromised Temple City residents were able to call and request welfare checks on Temple City residents who were not answering the phones. A CERT volunteer was dispatched to make the initial check, report back to the concerned party and obtain emergency services if necessary. CERT volunteers were also set up to greet residents coming to the help center at City Hall and make sure they were directed to the appropriate parties efficiently.

Temple City was one of the first cities to reach a state of normal operations, a testimony to the effectiveness of their commitment preparation and the training models LECMgt employed in the year prior to the windstorm.

We are excited to partner with Temple City again in 2014.